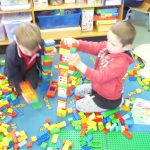 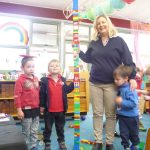 Steven and Chayse were making towers with DUPLO. They decided to join their towers together to make a ‘giant tower’. They thought the tower was taller than me. I said, “Let’s measure.” When they measured, I was taller than the tower. They wanted to add to the tower until it became taller than me. We used words like measure, tall, short, taller, shorter and compare. It is important to use correct mathematical terms with children to promote their vocabulary development.

Powered by WordPress | Hosted by Edublogs | Protected by CloudFlare