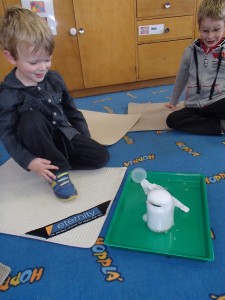 Tay’s Experiement
Equipment:
Jar with Rubber Seal, Bi Carb Soda, Tissue, Vinegar.
Put vinegar in the jar. Put bi carb soda in the tissue. Twist the tissue up. Drop in the jar. Wait for the lid to pop!

Tay brought a science experiment for morning meeting.  He used Bi Carb Soda and vinegar in a jar to create gas and make the lid pop off.  We all laughed!  We tried two other experiments involving gas.  We made a lava lamp and we made sultanas dance.  We tried to make the grapes dance but they must have been too heavy because they just moved a little bit.  The experiments are captioned with the photos if you want to try them at home. 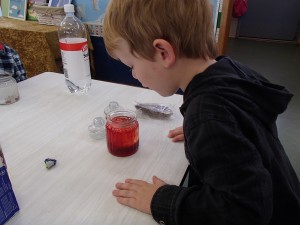 Lava Lamp
Put food colouring and water in the bottom of a clear jar. Carefully top up the jar with oil. Break an Alka-Seltzer tablet into four pieces and add to the jar. Watch the bubbles of gas rise. 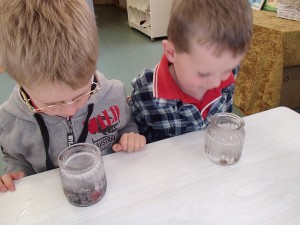 Dancing Sultanas
Fill a clear jar with Soda Water, drop in sultanas. Watch the bubbles collect around the sultanas and then they will gradually rise to the top and fall down again.