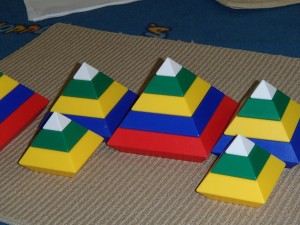 This week we have been talking about the pyramids of Egypt after one of the children made pyramids with the WEDGIT blocks.  I showed the children pictures of the pyramids of Giza in a book and from google.  We talked about how ancient Egyptians made pyramids to bury their dead pharaohs (kings).  We discussed how the kings were wrapped in bandages and they are then called ‘mummies’.  We bury our dead in boxes called coffins in a hole in the ground.  The pharaohs were buried with furniture, jewels and gold.  The pyramids had booby traps and mazes inside to stop the tomb robbers.  You children might be asking some strange questions this week!

One thought on “Pyramids”