We had another vote at Pre School today.  We were voting to decide what we should put into our Drama Corner now we have packed up our castle.  The children made three suggestions: A Supermarket, A Post Office and A Pet Shop.  We put pictures of each on our ballot paper and set up our voting booth again.  However when we did the count up we had a problem.  Cooper recognised the problem.  The problem was that the same amount of people voted for the Supermarket and the Pet Shop.  What were we going to do?

Anders suggested that we do one one day and one the next.  We explained that that would be a problem to keep setting up.

Cooper suggested we do a re-vote.  But what if everyone voted for the same?

Mrs Gayle suggested that we set up both – but we all agreed that there wasn’t enough room.

Mrs Grant suggested that the two children who voted for the Post Office re vote on the Supermarket or the Pet Shop.  We did this.  One child voted for each!  We were still a draw!

In the end we decided that we would have the Pet Shop for the remainder of the Term and the Supermarket next Term. 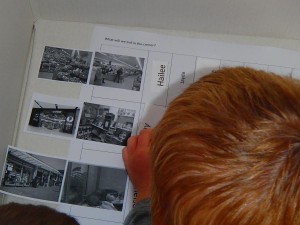 One thought on “Voting Again”