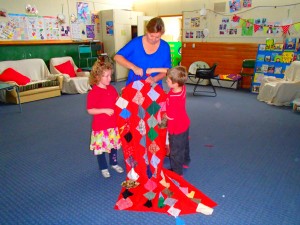 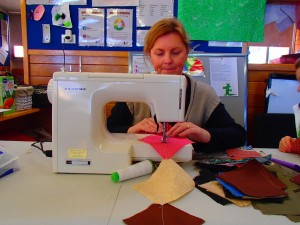 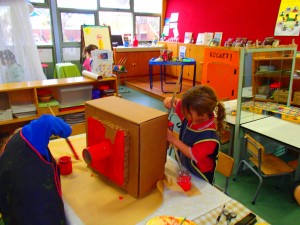 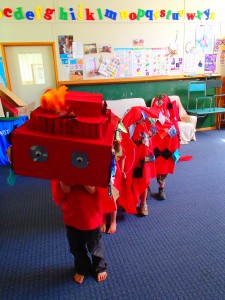 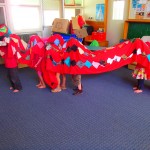 Cooper said “Let’s make a Chinese Dragon”.  Cooper has seen a Chinese Dragon at the Bendigo Easter Fair.  We pasted boxes together to make a head and then painted it red.  (Red is a lucky colour for the Chinese people.)  Then Mrs Grant sewed lots and lots of scrap fabric squares together to make the scales.  Some children had never seen a sewing maching in action and some thought we were knitting.  The children passed me the squares – making sure that we had no two squares the same side by side. Some children held the end and moved it forward as the chain grew.  First the children were hoping it would reach the outside door – but it went way beyond that.  It was exciting to watch it grow.  We changed direction and went into to the hallway and beyond.  It was a very long chain!  Then we laid out our red fabric and stuck the patterns on with fabric glue.  We sewed hoops into the body for the children to hold onto and decorated the head.  We have been working on this project on and off for the whole term.

Today we watched dragons doing a ‘Lion Dance’ on YouTube so the children could see the possibilities for moving the dragon.  We looked at the percussion instruments the people played and watched them wake a sleeping dragon.

Then we took our dragon outside for a practice.  Some of the children moved the dragon while the others played the instruments.  It was great fun.  This will become a part of our concert for family and friends in October. 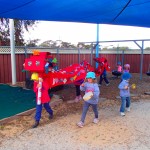 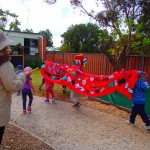 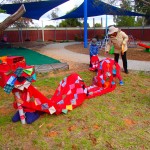 2 thoughts on “A Chinese Dragon”