The mystery of pirates captures the imagination of every child and children at our Pre school are no exception.  Our pirate learning started when Jake said he had a treasure map at home.  We all know that ‘X’ marks where the treasure is. 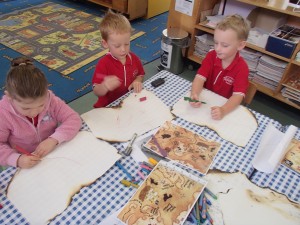 The teacher gave us some paper that had been distressed to draw treasure maps.  We used examples of treasure maps to stimulate us.

Then Mrs Gayle made a gold nugget with a rock, gold paint and sprinkles.  We played a game of hide the treasure.  We learnt to take turns, to hide our eyes (and not cheat!)  After we had hidden the treasure we had to be careful not to tell them where it was – and to give the others time to find it!  Very difficult when you are four.  We introduced the children to the idea of being ‘hot’ or ‘cold’.  We then filled our treasure chest with jewels (thanks Ann!) and gold coins (milk bottle tops) and we had fun playing with the treasure. 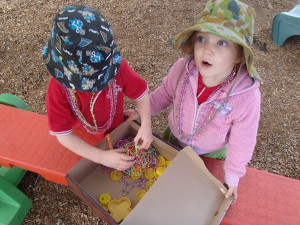 We also made treasure bottles with blue water, sand, shells, sequins, beads and glitter.  We shook them up and held the bottles up to the sun to see the ‘treasure. 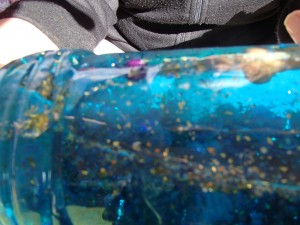 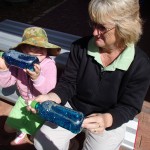 We made pirate ships from egg cartons.  Douglas and Lill 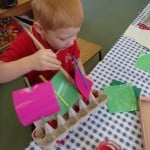 y really perserved at this task.  Douglas said, “This is hard work!”

And lastly we played a game called Pirate Ship.  We made a pretend ship outside.  The children had to listen and follow the Captains directions.  The directions included:

Eaten by a shark

This was a fun way to practice our listening skills! 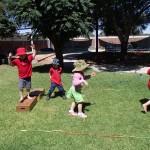