This years children love to do songs with props and actions (the more action the better!) Their favourites are Five Little Ducks, Five Current Buns, Ten in the bed and Five Speckled Frogs.  Douglas had an idea to sing about fish instead of ducks. 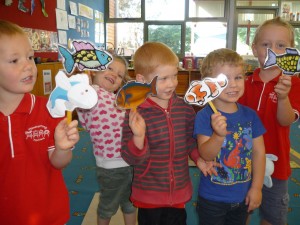 So we found six fish pictures on clip art and made fish puppets.  We discussed what the differences between fish and ducks were:

fish can’t go over the hill

We made up a new song:

To the rocks to hide away

But only five little fish came back

(I know this last line doesn’t rhyme – it was tricky!!)

But only five little fish did as she wish

So now we have a new song at Pre School. 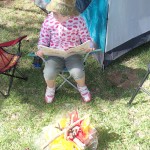 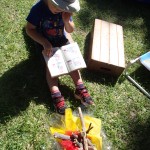 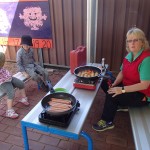 We have been ‘camping’ at Pre School all week.  Today we listened to stories around the campfire and read some of our own.  We made chicken kebabs, sausages, baked potatoes and campfire bananas for our lunch.  Some children found the feel of marinated chicken strange when they were threading their kebabs.  They couldn’t wait to wash their hands.

We have been camping this week at Manangatang Pre School.  The children have brought in their tent, sleeping bags, chairs and torches to create the experience.  Not all of the children have been camping before so this was a great opportunity for them to experience what they have been hearing the other children talking about.  The children used sticks, stones, sand, leaves, berries and flowers for pretend food and they cooked it on the BBQ.  We made fishing rods to play pretend fishing and when we were inside we used magnets to catch fish with numbers.  At the camp, Lilly said “I’m relaxing.”   And that’s what we all do when we go to the river! 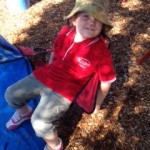 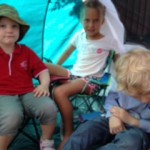 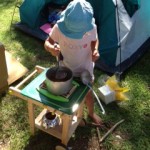 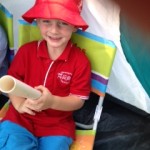 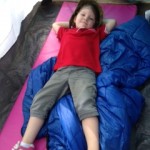 This week in our German session we learnt about Karneval (Carnival)  Karneval is linked to Shrove Tuesday (Pancake Day).  Shrove Tuesday is where people tradionally eat all the fancy food in their pantry in preparation for Lent (where people eat plain food) and this also marks the beginning of 40 days before Easter.  In Germany the people all wear fancy dress for Karneval and so we dressed up at Pre School.  Monika brought a treat to signify the cleaning out of the pantry.  During Karneval there are parades and people shout HALLO! (hello) to the spectators on the floats and the spectators yell HALLO! back. 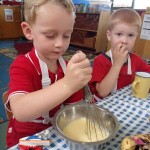 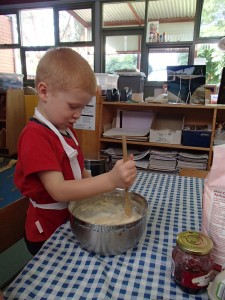 All around the world people were celebrating Pancake Day and we did too at Manangatang Pre School.  Apart from making and eating pancakes we drew pictures of pancakes, looked at a recipe with pictures, read the Eric Carle story of ‘Pancake, Pancake’ and learnt the poem “Mix a pancake”.