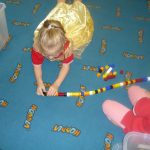 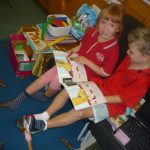 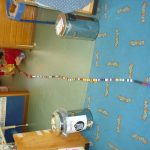 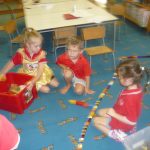 The children worked together to put all the unifix cubes in a line. It was nearly to the door. However they had run out of blocks. I reminded them about the book called ‘Line Up’ . In this story the little boy line up all of his toys until they reach the kitchen, where his mother is waiting for him to come to lunch. The children found some other toys until they reached the door. Mrs Gayle helped the children measure the line using fairy steps. It was 58 fairy steps long!