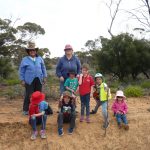 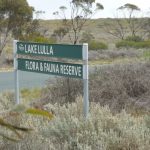 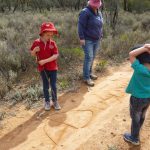 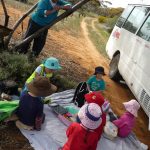 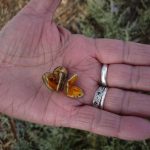 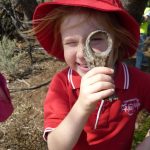 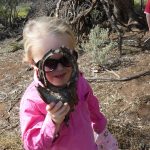 This week it was just the Pre Schoolers at Bush Kinder. We had a visit from Aunty Rose (Jaice and Brock’s Great Grandmother and Koorie Elder from Robinvale) Heidi and Jaice came along for the day too. We went on a long walk through the channel to the road. We saw foxes holes and had fun running up and down the steep banks. On the way back we went through the bush to the track, We followed a rabbit path. Some children questioned whether we were lost! Once we got the track there was some good dirt for drawing. So we all got some drawing sticks and drew a picture. Mrs Gayle wrote our names. The children were very excited to see the bus in the distance as we got close to base camp!
When we got back to camp we ate our morning tea. We couldn’t have a fire today because it was hot and windy. While we were eating morning tea, Aunty Rose told us a story about a naughty boy who turned into a koala and why koalas cry like babies. Lily said, “What else can you tell us?” Aunty Rose told us a story about a naughty girl who was picked up by an eagle and dropped into a nest!
Then it was free play in the cubbies. The girls played ‘schools’ and the boys played ‘badies’. After lunch we went back to Pre School to do our picture plates. See you next year Bush Kinder.