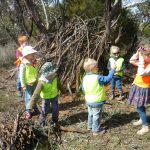 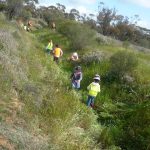 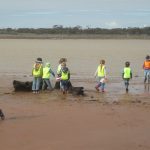 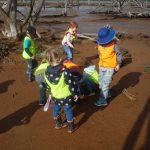 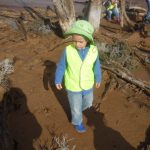 This week we took the Year Prep/One children to Bush Kinder with us. We went to Lake Lulla first. We had a big walk and we played on the muddy flats of the lake. The children looked for footprints and drew on the mud with sticks. The lake is very high this year due to the amount of rain we have had. This meant that the salt was all covered over. There were some trees and a few hills to climb at the lake.

After a walk at the lake we went back to our Ridley Rd camp site to have morning tea. Then it was off around the boundary again before the children went to play in our cubbies. One of the cubbies had been destroyed – so a group dismantled it and re built it. Another group made the big cubby even bigger with an extension.

Mrs Gayle helped us cook sausages and marshmallows on the fire. Then we ate some lunch. After lunch the children had a choice. They could go for a walk with Mrs Grant or stay at the campsite with Mrs Gayle. The children who went for a walk went to the dry channel to run up and down. There was illegally dumped rubbish in the channel. There was crime scene tape and the rubbish was covered with black plastic. This dumping is under investigation. It will be interesting to see what happens with this.